You are viewing an old revision of this post, from October 19, 2010 @ 06:25:41. See below for differences between this version and the current revision. 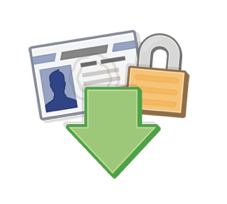 At Open Web Foo I led a small discussion of what I called the “Social Web memory hole” — the way that social networks suck in our contributions and then tend to bury them or make them inaccessible to their authors. It was a treat to share my ideas with this crowd of super-smart tech insiders, though I did have to spell out the Orwell reference (ironic nod to 1984, not joke about memory leaks in program code!).

What I heard was that this problem — which I continue to find upsetting — is most likely a temporary one. Twitter, I was assured, understands the issue and views it as a “bug.” Which is encouraging — except how many years do we wait before concluding that the bug is never going to be fixed?

Meanwhile, the same weekend, Facebook had just introduced its new “download your information” feature. Which is why, at this moment of Wall Street Journal-inspired anti-Facebook feeding frenzy, I want to offer a little counter-programming.

I do not intend to argue about whether Facebook apps passing user IDs in referrer headers is an evil violation of privacy rules, or just the way the Web works. There are some real issues buried in here, but unfortunately, the Journal’s “turn the alarms to 11” treatment has made thoughtful debate difficult. (This post over at Freedom to Tinker is a helpfully sober explanation of the controversy.)

So while the Murdoch media — which has its own axes to grind — bashes Facebook, I’m here today to praise it, because I finally had a chance to use Facebook’s “Download Your Information” tool, and it’s a sweet thing.

I have been a loud voice over the years complaining that Facebook expects us to give it the content of our lives and offers us no route to get that content back out. Facebook has now provided a tool that does precisely this. And it’s not just a crude programmer’s tool — some API that lets developers romp at will but leaves mere mortals up a creek. Facebook is giving real-people users their information in a simple, accessible format, tied up with a nice HTML bow. What you get in Facebook’s download file is a Web directory that you can navigate in your browser, with all your posts, photos and other contributions, well-presented and well-organized.

In my case, I don’t have vast quantities of stuff because I haven’t been a very active Facebook user. The main thing I do on Facebook, in fact, is automatically cross-post my Twitter messages so my friends who hang out on Facebook can see them too. Twitter, of course, still has that “bug” that makes it really hard for you to access your old messages. But now, I actually have an easily readable and searchable archive of my Twitter past — thanks to Facebook! Which, really, is both ironic and delicious.

Here’s what Facebook’s Mark Zuckerberg had to say about the Download feature in a Techcrunch interview:

I think that this is a pretty big step forward in terms of making it so that people can download all of their information, but it isn’t going to be all of what everyone wants. There are going to be questions about why you can’t download your friend’s information too. And it’s because it’s your friend’s and not yours. But you can see that information on Facebook, so maybe you should be able to download it… those are some of the grey areas.

So for this, what we decided to do was stick to content that was completely clear. You upload those photos and videos and wall posts and messages, and you can take them out and they’re yours, undisputed — that’s your profile. There’s going to be more that we need to think through over time. One of the things, we just couldn’t understand why people kept on saying there’s no way to export your information from Facebook because we have Connect, which is the single biggest large-scale way that people bring information from one site to another that I think has ever been built.

So it seems that Zuckerberg and his colleagues felt that they already let you export your information thanks to Facebook Connect. Again: True for developers but useless for everyday users, unless and until someone writes the code that lets you actually get your data — which is what Facebook itself has now done.

I think this means Facebook is beginning to take more seriously its aspiration to be the repository of our collective memory — a project that Zuckerberg lieutenant Christopher Cox has rapturously described but that Facebook has never seemed that serious about.

I still have questions and concerns about Facebook as the chokepoint-holder of a new social-network-based Web. I’d really rather see things go in the federation direction that people like Status.net, Identi.ca and Diaspora are all working on.

Still, Facebook isn’t going anywhere. It’s a fact of Web life today, and so its moves towards letting users take their data home with them deserve applause.

What I’d like to see next is an idea that came out of that Open Web Foo session: As we turn Facebook and other social services into the online equivalent of the family album, the scrapbook and the old shoebox full of photos, we’re going to need good, simple tools for people to work with them — to take the mountains of stuff we’re piling up inside these services and distill memorable stories from them.

The technologists in the room imagined an algorithmic way to do this — some version of Flickr’s “interestingness” rating, where the service could essentially do the work for you by figuring out which of your photos and posts had the most long-term value.

I’m sure there’s a future in that. My vision, as a writer, is something simpler: a tool that would let us easily assemble photos and text and video from our Facebook troves and turn them into pages that tell stories from our own and our friends’ lives. Something like Storify, maybe. I think we’re going to need this, whether from Facebook itself or from a third-party app developer.

That “cloud” we’re seeding with our memories? Let’s make it rain the stories of our lives.