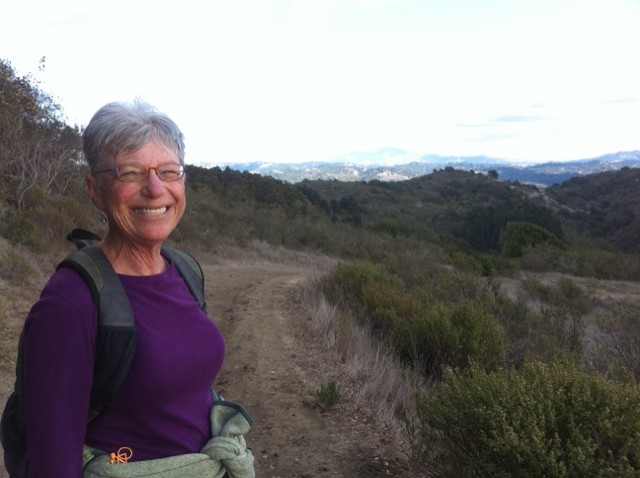 This is the second post in my homage to Spalding Gray’s “Interviewing the Audience” — this time, with a spotlight on someone I’ve know for two decades. I first met Sylvia Paull when I somehow stumbled on the Cybersalon she was hosting in her Berkeley living room in the early ’90s. She is a great connector of people and ideas; these days she runs two different lunch series (one tech-oriented and one for women to share ideas) and hosts speaking events at the Hillside Club, still under the Cybersalon rubric.

A Fast Company profile once called Paull “a public relations icon.” Yet unlike so many who have labored in that field, she is fearless about speaking her own mind. I’m grateful for the time she took to answer my questions.

Who are you and what are you up to? Tell us a little about yourself — or a lot.

Who is Sylvia? That’s my email moniker, the title of a Shakespeare sonnet and a Schubert lieder, and it’s a question I ask myself every day. I’m a writer who makes her living writing for high-tech startups and nonprofits that want to be covered by media, attract an audience, and become famous for what they do.

I was the first U.S. citizen born in Germany after WWII, in 1946, and General Dwight D. Eisenhower came to visit me and my parents at the U.S. Army hospital in Frankfurt am Main. My father, trained as a conductor, was Eisenhower’s bandleader; he met my mother, a German Holocaust survivor, right after WWII when he went to find missing relatives at the Jewish refugee services, where she was working. They regarded my birth as something of a miracle. My birth certificate, which is in German, identifies me as neither German nor American but as “Israelisch.” Like many Jews of my generation, I was named after a dead relative. One of my first memories is of two Yahrzeit candles burning on the mantelpiece of our San Francisco home and my mother telling me they stood for her father and her mother.

Our house was filled with music, food, and absence. My father was gone for 18 months when he led a U.S. military band in South Korea during the so-called Korean conflict. He said that General Douglas MacArthur, the military commander, refused to let his soldiers put on winter clothing until the final victory march. There was no victory, and all of the men in my father’s band were left behind to freeze in Chinese prison camps. My father, because he was an officer, albeit the lowest ranking chief warrant officer, was in the last batch of troops ferried to an escaping ship.

Another early memory: I am five years old waiting for my father to come off a troop ship anchored in San Francisco Bay. If I listen, I can still hear the ship’s horn echoing through the fog. The ship’s passengers are quarantined because of some illness, and we stare out of the window in the Sunset District, waiting for our father to appear out of the mist. He finally comes, much heavier than before, wearing a thick winter coat. Every week during his absence, my mother had baked a marble cake — swirling chocolate into vanilla batter, which my sister and I got to taste by licking the prongs from the electric beater and the mixing bowl — and sent the cake to Korea. Dad lived on those cakes, and also canned beans, because he wouldn’t eat non-kosher meat.

I asked him if he ever shot anyone, and he wouldn’t tell me. He did say the band played live music at the front lines while the Chinese placed tape recorders and speakers in the terrain to rouse their troops to battle.

We later moved to Bremerhaven, Germany, where I got my first bicycle and pedaled over cobblestone streets. We lived in a military zone, occupied by the British and the U.S. I had to be careful never to go off road because of live landmines. Convoys of tanks regularly commandeered the roads, and I’d weave my one-speed bicycle, decked out with embroidered badges and flags, between them. At the U.S. Army school, we played ghost in a bomb shelter left over from WWII, and on Sundays, my dad would take us to a desecrated Jewish cemetery and read us stories from the Old Testament. On weekends, we went to the local opera house, rebuilt after the war, and listened to light operas like Die Fledermaus, and ate chocolates filled with real liquor.

I am a product of WWII, and although I am and have always been an American, I feel European and also part of a world that no longer exists. It’s ironic, because I make my living by celebrating the disruption of former worlds.

Writing and bicycling make me forget who I am. Instead, I become what I do. Once I dreamt I was writing a great novel – in German – and when I woke up, I had the certain feeling that I would write that book some day. When I was 50, I took up amateur bicycle racing and raced all over Northern California. I remember a breakthrough race when my body just took over – my mind disappeared – and I felt as if my purpose in life was to bicycle fast. When my mind did reappear, it said, “This is what life is all about.” Having a child was like that, too.

Is there anything (or things) about the Web and social media today that you think get in the way of you “being yourself” — or other people being themselves?

It’s scary how ubiquitous computing has become. Going anywhere, people are always checking their mobile devices. Maybe this puts them more in touch with themselves than looking at random people and objects in the street would do, but it just seems weird and kind of habit-forming.

I used to smoke cigarettes, and the need to constantly check one’s mobile device reminds me of the nicotine habit.

I read good writing, usually in print form because it’s easier on the eyes and I’m used to print. (I used to work in the UC Printing plant, where typesetters laid lead type by hand.) Every day I read The New York Times, which is delivered to my place. I start with the obituaries, then the op-ed columns, the arts, business, and finally, the “news,” which is old by the time it appears in print. I choose to read whatever my favorite reporters write, people like Patricia Leigh Brown, Kim Severson, David Carr, and Dwight Garner (these are all NY Times bylines).

I read Re/code for tech news because the writing and curation demonstrate a standard for selection, whereas most tech sites churn out whatever press releases come their way.

I’ve been reading The New Yorker since I was nine. I take handwritten notes on articles and stories I like and look up words I don’t know.

I don’t have a television and do not watch TV shows on the Internet. The only live videos I watch are bicycle races like the Giro d’Italia and the Tour de France. I watch Netflix movies, mostly foreign films and particularly German movies, which are usually grim. I also go to movie theaters regularly, as well as Berkeley Rep, and the Hillside Club for concerts.

I listen to a variety of Internet radio stations, from college stations across the country to the Mozart channel and Cajun music. I rarely listen to radio news, except once in a while I’ll turn on NPR while I’m preparing a meal. I used to co-produce a radio show on science for UC called Science Editor, so I’m jaded about radio news and interviews. I know what goes into the sausage.

I give money to KQED, Grist, the Center for Investigative Reporting, and Berkeleyside because I support independent journalism, but I don’t always read everything they send me. If I only have two hours a day for absorbing news, then I’ll stick to the Times and Re/code.

Years ago, Dave Winer got me started on a blog: whoisylvia.typepad.com. It’s become a forum for me and myself, since most people don’t have time to read other people’s blogs, myself included. I also host several events, more like salons, where I like to get people questioning the way we think about work, play, and life in general. These are listed on my web site at www.sylviapaull.com.

Spalding Gray used to do a show called “Interviewing the Audience,” turning the tables on his usual format, in which he presented monologues about his own life. Spalding, alas, is gone, and the word “audience” itself has lost most of its meaning. But I still love the spirit of that idea, so I want to play around with it here. Let’s call it “Interviewing The People Formerly Known As The Audience.”

I asked for volunteers from subscribers to my weekly email and got a few. At some point in the future I’ll probably just randomly email visitors and subscribers asking if they want to participate. As you can see, this is not a tough interview — just a way for me to get to know you better, for you all to hear one another’s ideas, and for Wordyard to be less one-way and more in-the-round.

Our first interview is with Ken Hittel, who blogs at SocraticObserver.com. Here he is with a cat that appears to be named Jane Austen, which is a pretty great name for a cat:

Ken, who are you and what are you up to?

Teaching (and listening & learning) — whether through writing or personal contact.

What’s one good thing you want to see happen on the web over the next year?

Choosing stuff? much is old habit, rest is serendipity.

Well, there’s a lot of good stuff — but I won’t resist the temptation to name my own blog: SocraticObserver.com and my constant and faithful day-time companion, Spike of Broadway: