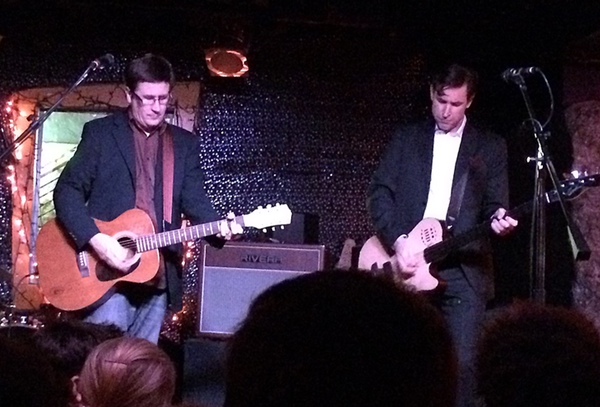 I thought I came late to John Darnielle and the Mountain Goats. By the time I discovered them in 2004, they already had a dauntingly extensive catalog of tapes and albums under their belt. But it turned out to be good timing: they were on the cusp of a creative leap. Now I’ve been a fan for a decade (previous posts here, here, and here).

I love this music, and I spent the past weekend in a happy haze of it. The band, which has built a devoted and growing following, played three remarkable shows at the Bottom of the Hill in San Francisco. It’s a tiny place, a club that holds maybe 200, 250 people. Most performers who’ve reached the stage Darnielle is at would play bigger places exclusively.

These gigs have downsides, I’m sure, for him: Less money, no doubt. More of his time (you play three nights to reach the same number of people you could reach in one at a bigger hall). And, I have to assume, some sacrifice in the amenities available in the performers’ lounge. But the plus is a kind of familiarity and intimacy with the crowd that you simply can’t fake.

Each night this weekend, the Mountain Goats played the full sequence of songs from one of the cassette tapes they’d recorded on a boombox in the ’90s. And each night, as they dusted off these for-diehard-fans-only tracks, a significant proportion of the audience sang along.

This kind of choice may not support Darnielle in his retirement, I guess. But if one of the goals of an artist is to have one’s work connect with others — and to know that the connection has been made, to feel the circuit completed — it’s got to be a powerful thing.

There’s a parallel here between the Mountain Goats’ decision to play a smaller venue and the choice we can each make to favor meaningful exchanges over “social reach,” friend counts, and follower numbers.

If you listen to the Mountain Goats’ music or read Darnielle’s Tumblr or Twitter feeds, you get a pretty strong sense that he knows exactly what Jeff Pooley meant by the “authenticity bind.” And he has a pretty powerful strategy for, if not defeating it, at least side-stepping it.

Part of that comes from being an incredibly talented and defiantly idiosyncratic songwriter and performer. (He’s also got a novel coming out later this year.) Part of it, I imagine, also comes from a whole career spent tracing the contours of authenticity.

Last night, between songs, Darnielle delivered a disarmingly intense monologue about the challenge any performer faces in trying to stay “real” onstage night after night. It also very much applies, I think, to our everyday lives, and our online selves, too. Here it is (transcribed from the recording here):

There are some people who’ve been here three nights in a row. I don’t script what I say between songs. But then if I’m describing a song, I’m gonna say something generally in the same ballpark that i said the other night. And I’m really self-conscious about this.

But at the same time, he’s got a very different idea about performance, insofar as he didn’t do it for like 15 years… So he came out to play the show, everybody in my town went to see it and just was knocked over. He’d tell these stories between songs, he doesn’t have a teleprompter, it looks and feels like it comes straight off the dome, but that’s because he’s a performer.

The next time he came back, everybody bought tickets for two nights. They went back night two, it was the same set-list, and the same patter, some of which sounds very improvised. And they were all grief-stricken.

Now I wanted to defend Leonard Cohen, but at the same time — because, I think, this has to do with being Catholic — a deep fear is instilled in me, that if I do anything of the sort, someday I will look out at the person who I saw the previous night and I’ll be telling the same story, and their face will fill with sorrow, and they will give me a look which says: “You have betrayed me. And I didn’t need you to betray me.”

Each of us distills life into stories we tell one another — in person, in media, in art. Repetition is inevitable. Keeping it real is hard.

You can take Cohen’s road: become transcendently good at repeating yourself, at creating the performer’s magical illusion that each scripted moment is spontaneous. Or you can take Darnielle’s road: look people in the eye and pledge to do your damnedest to make each presentation of yourself as fresh and open as you know how.

I think both approaches are honorable. But Darnielle’s holds up better on the second night.