Earlier this week I received my (pre-ordered) copy of the new Mountain Goats CD, “Heretic Pride.” My enthusiasm for the music of John Darnielle now dates back four years, and this is one infatuation that has only grown deeper with time. I am, unabashedly, a fan.

And yet I think I’d love “Heretic Pride” even if I encountered it with no grounding in the Mountain Goats’ stuff. This is what passes for an upbeat album from Darnielle: it’s full of joy, but that’s joy in the face of terror. 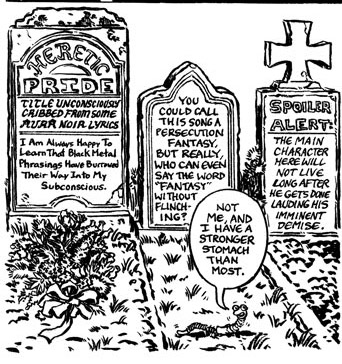 The title track, for instance, is a defiant hymn soaring out of the throat of some unspecifiedly nonconformist protagonist who has been dragged out of his house and through the streets toward his doom. Of this song, Darnielle writes: “Spoiler alert: The main character here will not live long after he gets done lauding his imminent demise.” (This commentary appears in notes to the album that were apparently provided in the press kit; an artist named Jeffrey Lewis took them and illustrated them in tabloid-comic strip form — the style of those salvation-in-six-frames handouts that evangelicals used to distribute, and perhaps still do.)

There are songs here (you can sample them at the 4AD site) about Chinese sea monsters and pulp novelists, murdered reggae singers and imaginary cults. Titles include “Lovecraft in Brooklyn” and “Marduk T-Shirt Men’s Room Incident.” The pace is livelier and more varied than on the Goats’ somber last outing, “Get Lonely”; superb drumming from Jon Wurster drives the faster numbers, and majestic string arrangements by Eric Friedlander bathe the slower ones.

If the album doesn’t sate you, you can also enjoy the satirical ditty about this year’s elections that Darnielle knocked off for a recent public radio show. Titled “Down to the Ark,” it imagines the whole civic process as the triumph of a satanic cult. You can listen to it here.

Three Mountain Goats shows are lined up here in the Bay Area next weekend. I intend to be at all of them! Come say hello.

LATE ADD: Darnielle dissects the characters in five of his songs in this interview on Emusic. 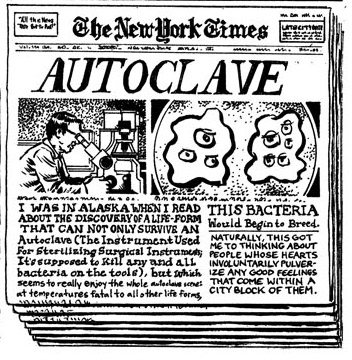