You are viewing an old revision of this post, from November 15, 2010 @ 06:12:03. See below for differences between this version and the current revision. 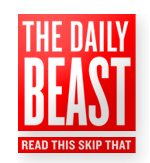 I watched the mini-circus of media coverage that accompanied Friday’s announcement of the Newsweek/Daily Beast merger, and joined in the name mashup fun (I favor the Daily Week). Like a lot of people, I alsoI scratched my head: Lashing two money-losing operations together doesn’t seem all that smart.

I mean, it’s possible to imagine burning through that kind of money on a company with 70 employees. It helps if (a) you have no revenue and (b) you pay people lavishly, throw tons of parties, give everyone an outsize travel budget, and spend a fortune on marketing — all of which Brown is entirely capable of.

Still, a loss of $10 million? I wanted to know where that number came from.

I spent some time over the weekend looking around, and as far as I can tell, this figure has only one source, in a Wall Street Journal story that ran last month:

The Daily Beast is expected to lose about $10 million this year, said a person in the know; executives say it’s on a pace to be profitable in two years.

So all we have behind this much-bruited-about number is a single anonymous “person in the know,” who might be the Daily Beast’s accountant or might be Tina Brown’s hairdresser. (Meanwhile, those “profitable in two years” predictions are not worth the breath required to utter them; every money-losing media company has a plan to be profitable in two years.)

Yet the Beast’s $10 million loss has now graduated from this thinly sourced ballpark figure to become received wisdom in the business press. Saturday it turned up in a New York Times piece:

It is an epiphany Mr. Diller most likely came to after seeing no other alternative for eventually turning a profit from The Daily Beast, which is losing on the order of $10 million a year.

I’d be curious to know where the Times piece got its hedged “on the order of” figure. Is it just repeating the Journal’s number? If it was independently sourced, why no mention of that? If the story used some back-of-the-napkin reckoning to arrive at the figure, shouldn’t we see it?

There’s no question that reporting on the finances of an outfit like the Daily Beast isn’t easy; execs will never voluntarily share unflattering numbers. (If you look at the SEC filings of Daily Beast parent IAC, you don’t get much help; Tina Brown’s fiefdom is not broken out on a separate line.) Despite reporting directly from within the belly of the Beast, media-reporting star Howie Kurtz, who recently left the Washington Post to join Brown’s outfit, offered no help in his own lengthy piece on the merger.

Still, we all could do better when casually throwing numbers like this around unless they are better documented. I’m sure the Daily Beast is losing a nice chunk of change, but it’s not at all clear to me that anyone outside the place has a clue whether that number is $5 million, $10 million or more.

Now that Brown’s losses are going to be mixed up with Newsweek’s, of course, figuring out who’s responsible for any ultimate profit or loss will become much more difficult, even from inside the organization. Brown will get to keep busting budgets for a spell and will no longer bear sole responsibility for the bottom line.

This sort of responsibility dilution was one of the reasons AOL’s savvy management sold out to Time Warner a decade ago — a merger that looked dubious to me from the get-go. I get the same whiff of fear and train-wreck from the Daily Week — only, this time around, the stakes are a lot lower.