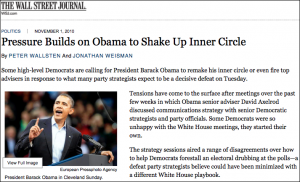 Right before the election last week the Wall Street Journal ran a story that suggested the Obama administration was suffering a veritable collapse, with top Democrats demanding Obama reshape his entire administration. Great story — only there wasn’t a single quote, sourced or anonymous, backing up the headline and lead.

MediaBugs has been working this one, but with no response from the Journal to date. A blog post by my colleague Mark Follman explains the situation:

Just ahead of last week’s election the Wall Street Journal reported that “high-level Democrats” were calling for President Obama “to remake his inner circle or even fire top advisers” in the face of an imminent drubbing at the polls.

But an error report on MediaBugs flagged a conspicuous problem with the story: It contained no evidence supporting the claim in its headline and first paragraph. Not a single one of the eight people quoted in the piece called for Obama “to remake his inner circle” or “fire top advisers.” (Read the story here.)

Over the past week we contacted the Journal five times seeking a response to the error report. We emailed a reporter, a managing editor and a general address designated for reporting errors to the newsroom. We also called the phone number listed with corrections info in the print edition. We haven’t received any response.

[read the rest at our MediaBugs blog]

It’s normal in journalism to move right past this sort of thing — to shrug our shoulders, write these distortions and problems off as the province of yesterday’s fishwrap, and forget about them. At MediaBugs we’re going to try something different: to establish a record, public and relatively permanent, of this kind of incident. Whether the Journal ultimately provides an explanation or not, we think this will be valuable, for both journalists and the public.