Wordyard / Business / What if the future of media is no “dominant players” at all?

The New Yorker’s John Cassidy recently concluded a skeptical review of the finances of Gawker Media (which I caught up with late) — a piece somewhat ludicrously headlined “Is Nick Denton Really the New Rupert Murdoch?” — by asking the following question:

Can Gawker Media (and other blogging outfits such as the Huffington Post) translate their rapid audience growth into big streams of revenue and profits, thereby becoming dominant players in the news-media business? Or will the established players, which now have sizeable online arms as well as other sources of income (and costs), ultimately come out on top? Therein lies the future.

“The future” has been lying “therein” over and over for the last 15 years, yet it never seems to turn out that way. This kind of thinking drives me nuts — it’s always a zero-sum battle for dominance. (Can the scrappy little new guys grow so powerful that they’ll replace the big old guys? Or will the lumbering big old guys survive and “ultimately come out on top”?) And it always misses the point. 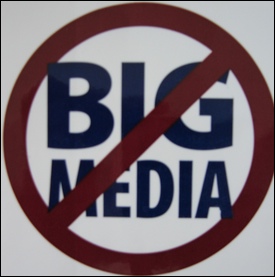 There are many other imaginable scenarios. Here’s the one I think is most likely.

Denton’s Gawker, Huffington Post, and similar-scale ventures won’t “become dominant players.” But those that husband their resources and play their cards smartly will survive, continuing to grow and to figure out the contours of the new media we are all building. They’ll be active, important players, without “dominating” the way the winners of previous era’s media wars did.

Meanwhile, “the established players” will fall into two groups. Many will collapse under the weight of their legacy costs and dwindling revenues, as so many are already starting to. Others will survive by figuring out, in time, how to cut costs while expanding their online reach.

The survivors in the second group will find that they can be profitable and do good work, but they will hardly have “come out on top.” In fact, as companies, they will come out looking much more like Gawker Media and Huffington Post than today’s Time Inc. or New York Times Company.

(The other factor here is that new “dominant players” may enter from other quarters — just look at the investments AOL and Yahoo are making in content. But I think they’ll find dominance elusive, too.)

In other words, this is a future with no small group of “dominant players,” but maybe a much broader spectrum of modestly successful players. This is because, in a world awash in content, the media business is never going to be as profitable as it was in a world of scarce content. It will be sustainable, but it won’t support the sort of monopoly profits that made it so attractive for seekers after dominance, you can check this website to find more info

It is also a world where there are no more Rupert Murdochs, which would come as a relief.

This outcome is almost entirely inconceivable to New York media insiders and to the reporters whose job, like Cassidy’s, is to cover their world.

The rest of us should cross our fingers and hope that…therein lies the future.