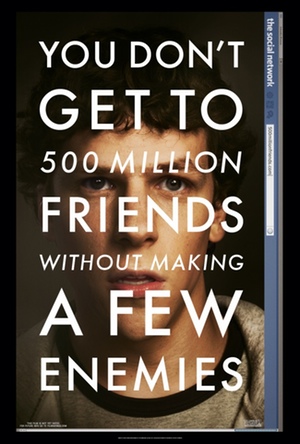 Many thoughtful pieces have already discussed the movie, and I don’t want to rehash them. I agree more with my friend David Edelstein’s take on the film’s cold triviality than with the enthusiastic raves from other quarters. Go read Lawrence Lessig and Jeff Jarvis for definitive critiques of the film’s failure to take even the most cursory measure of the real-world phenomenon it’s ostensibly about. Here’s Lessig: “This is like a film about the atomic bomb which never even introduces the idea that an explosion produced through atomic fission is importantly different from an explosion produced by dynamite.” Over in Slate, Zuckerberg’s classmate Nathan Heller outlines how far off the mark Sorkin wanders in his portrait of the Harvard social milieu. (Obsessive, brainy Jewish kids had stopped caring about whether they were excluded from the almost comically uncool final clubs at Harvard long before my own time there, and that was quite a long time ago by now.)