Wordyard / Blogging / Journalists follow their voices, vote with their feet 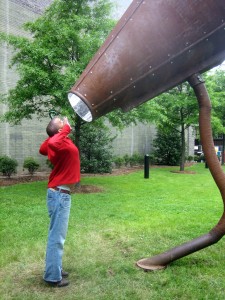 As the beleaguring of traditional news organizations continues, newsrooms are actually growing elsewhere. You may have noticed that places like Yahoo, AOL and the Huffington Post are all hiring these days — and they’re hiring, um, actual journalists.

Yesterday we learned that New York Times economics correspondent Peter Goodman was decamping for HuffPo. “For me it’s a chance to write with a point of view,” Goodman told Howard Kurtz. He described fitting into the Times voice as “almost a process of laundering my own views, through the tried-and-true technique of dinging someone at some think tank to say what you want to tell the reader.”

You get what this means, right? The View from Nowhere has become a liability in keeping newsroom talent

It’s not so much that @petersgoodman wants to be a pundit. He wants to report what’s really going on. In his own voice.

Yahoo has been building a bloggy news organization, too. But today we learned from Andrew Golis that one of his high-profile hires, former Gawker writer John Cook, was leaving Yahoo and returning to Gawker. Golis explained: “He decided that he prefers the license Gawker gave him to add his opinions into his reporting to the scale and credibility Yahoo! News could offer.”

So Yahoo, theoretically a “new” news organization, also finds itself losing talent because of its house rules about mixing “opinion” and reporting. The story isn’t as simple as “journalists flee old media for new so they can write in their own voices.”

Consider that the most consistently and determinedly enforced code of neutrality in today’s media world can be found not in an old-school newsroom but on Wikipedia, where “neutral point of view” is a sacred first principle. We need a better framework for talking about these issues than the crude formula of “Traditionalists prefer objectivity, new media goes for personal voice.”

I’m sympathetic to Rosen’s “View from Nowhere” argument, which neatly inverts the “fair and balanced” rhetoric of traditional objectivity to underscore its downside, and proposes “where I’m coming from” as a more tenable basis for trust in media. I think the “sacred cloak of objectivity,” to use the term recently invoked by the Times’ new public editor, is tattered beyond repair. But I also sympathize with the folks at the Times and Yahoo who just lost some talented employees by policing institutional boundaries for individual writers’ voices.

To understand today’s newsroom musical-chairs moves, I’d point you back to my post on the blog-broadcast barrier and the reach-reliability ratio. The stewards of a Yahoo News, with its phenomenal-sized audience, or a New York Times, with its blue-chip reputation, need to perform a balancing act: They can’t pretend that the world isn’t changing around them, and that their readers really do expect and demand less faux objectivity and more transparency and interpretive honesty today. But they also understand that their reach and influence demand extra protocols of responsibility and care. I think they’re right to do so, even if it means that they move a little more cautiously into the future.

The challenge for their managers is a subtle one: How to infuse their coverage with the distinctive human voices of journalistic observers who no longer wish to suppress their personal perspectives, while also insuring that the big megaphones they own do not turn into amplifiers of treacherous rumors, personal vendettas, or partisan lies. (Fox News provides a handy negative exemplar here.)

I think the answer will turn out to have a lot to do with really smart editors who are willing to experiment with new forms — editors who actively encourage writers who show “where I’m coming from” but guide them away from the worst excesses of unfiltered personal journalism.

Editing is a behind-the-scenes role, and it’s threatened by both the bruising economics of the current media biz and by the publish-first-ask-questions-later logic of the digital age. But editorial entrepreneurship is how the most creative institutions will begin to square the circle they face — finding a home for writers who expect to have strong voices while also responsibly serving their mass audiences.