Wordyard / Books / Carr’s “The Shallows”: An Internet victim in search of lost depth 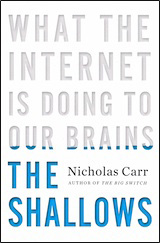 One day, immersing myself in my reading was simple as breathing. The next, it wasn’t. Once I had happily let books consume my days, with my head propped up against my pillow in bed or my body sprawled on the floor with the volume open in front of me. Now I felt restless after just a few pages, and my mind and body both refused to stay in one place. Instead of just reading, I would pause and ask, “Why am I reading this and not that? How will I ever read everything I want to or need to?”

I was 18. It would be years before I’d hear of the Internet.

Nicholas Carr had, it seems, a similar experience, quite a bit more recently. He describes it at the start of his book The Shallows: What the Internet is Doing to Our Brains:

I used to find it easy to immerse myself in a book or a lengthy article. My mind would get caught up in the twists of the narrative or the turns of the argument, and I’d spend hours strolling through long stretches of prose. That’s rarely the case anymore. Now my concentration starts to drift after a page or two. I get fidgety, lose the thread, begin looking for something else to do. I feel like I’m always dragging my wayward brain back to the text. The deep reading that used to come naturally has become a struggle.

When I experienced this loss of focus, I simply blamed my new condition on my newly acquired adulthood. Carr, apparently, was lucky enough to retain his deep-reading endurance undisturbed from childhood well into his grownup years. By the time it began to slip away from him, we were all deep into the Web era. Carr decided that, whatever was going on, the Web was to blame. It wasn’t something that simply happened; it was something that the Internet was “doing to” his brain.

The Shallows has been received as a timely investigation of the danger that information overload, multitasking and the Web all pose to our culture and our individual psyches. There are serious and legitimate issues in this realm that we ignore at our peril. (Linda Stone is one important thinker in this area whose work I recommend.)

So I cannot fault Carr for asking what the Internet is doing to us. But that is only half of the picture. He fails to balance that question with its vital complement: What are we doing to, and with, the Internet? This imbalance leads him both to wildly overstate the power of the Internet to alter us, and to confuse traits that are inherent to the medium with those that are incidental.

Carr writes as a technological determinist. In asking what the Internet is “doing to” us he casts us as victims, not actors, and once that casting is in place, there’s only one way the drama can unfold. The necessary corrective to this perspective can be found in the opening chapter of Claude Fischer’s great history of the telephone, America Calling. Fischer admonishes us not to talk about technology’s “impacts” and “effects,” because such language “implies that human actions are impelled by external forces when they are really the outcomes of actors making purposeful choices under constraints.” (Emphasis mine.)

Much of Carr’s argument hangs on the notion of neuroplasticity — our brains’ remarkable ability to rewire themselves over time in response to our behavior and the environment. Current theories on the evolution of reading suggest that our ancestors became readers by adapting specialized visual and language circuitry that existed long before the invention of written language. Carr fears that, as we do more of our reading on screen, we will rewire our brains again, and lose the ability to sink into an associative reverie — to achieve that level of contemplation where our minds make connections, raise questions, and connect what we’ve just read with everything else we know.

I love those moments too, and I’d hate to lose them. (I find that I have them as often when I’m reading online as when I’m reading a book, even though, according to Carr, that’s not supposed to happen.) But if the Web steals them from our brains, doesn’t neuroplasticity mean that we can win them back if we want? If the Web undermines our memories, as Carr also suggests, wouldn’t the loss be reversible? Carr’s neuroplasticity is strangely one-way: The Net rewires our brains a certain way, and then we’re screwed. Somehow, plastic turns to stone. But if we are “actors making purposeful choices under constraints,” rather than abject victims, surely we can steer out of the shallows should we need to.

The Web’s distractions are real, but they are hardly as oppressive or as inescapable as Carr would have it. Some of the Web’s welter of inputs is actually productive or valuable: the relevant links, the abundance of deep reading on so many subjects, the chances to read point-counterpoint arguments and draw our own conclusions. These opportunities weave exactly the kind of associative meaning Carr cherishes; if they distract us, they do so by requiring us to cut a path through a rich environment of information — just as, say, a great library does.

Then there are the true distractions: the blinking ads, the irrelevant links, the desperate strategems to make your fingers click and your eyeballs tarry. As I wrote last week, these patterns aren’t ingrained in the Web medium itself. Rather, they emerge from the desperate behavior of publishers who have still not figured out how to make the new medium work. Irritating as they are, they are not a fixed part of the Web, any more than the ads that publishers once appended to paperback books were a permanent feature of printed literature, or the raffles that helped sell matinee tickets were an inalterable aspect of moviegoing.

Blinking banners, interstitial videos, floating animations — yes, these all do mess with our concentration. Google’s little text ads, on the other hand, largely don’t. Which business has a future? The one that lets us enjoy our reading.

The Shallows is enjoyable reading itself: Carr makes a better Net skeptic than most of the competition. There’s none of Andrew Keen’s grandstanding hyperbole, Lee Siegel’s self-serving pugnacity, Mark Helprin’s overheated fustian. I found interesting pointers and references in nearly every chapter (though I wished they’d been linked!). But the deeper you read into Carr, the clearer it becomes that his animus against the Internet is really just a commonplace “things ain’t what they used to be” complaint.

For all its scientific trappings and rhetorical aplomb, The Shallows turns out to be less of a work of digital-age analysis than a requiem for some lost ideal of literacy. The loss, it seems, has already taken place; the book is shot through with a nostalgic ache. It presents old-fashioned reading as a lucky break in human development, unnatural, hard-won, and so fragile that a few years of Web publishing threaten to wipe out three millennia of intellectual progress.

This places Carr’s book squarely in the “going to hell in a handbasket” school of criticism. In this genre, cultural norms and styles revered in the critic’s youth are imperiled by some insidious new force — the Lindy hop or the twist or the lambada; Jews or Catholics or Muslims; nihilism or communism or relativism; radio or television or the Web.

Over time, this perspective forms an infinite regression of dismissal. The generation that taught me in the ’70s looked down upon the literary life of that time as hopelessly debased by television and pop culture. Their standard was the more orderly culture of their youth — an era whose writing had, in turn, appeared degraded and uncouth next to the world of its Edwardian predecessors. Who could only look sadly inadequate in the eyes of their Victorian elders. You can follow this chain back at least to the 18th century, if not to the dawn of the reading public itself.

The fallen present keeps repeating itself in this critical Groundhog Day, with its mourning over the passing of a silver age that in turn looks back to some golden age. We seem to be suckers for this stance. But despite its reflexive pessimism, we have never gotten so disheartened as to actually stop reading.

Carr has not convinced me that the Web will change that. It may lead us to read fewer books; that’s because we’re reading more other stuff, and almost certainly reading more overall — at least some of it deeply. We’re encountering more ideas from more minds. And many of us are writing a great deal more — a consequential change that Carr, himself an adept blogger, is strangely silent about.

When my 18-year-old self realized that reading had ceased to be an effortless rapture, I didn’t give up; instead, I adapted. I turned off the stereo so I could concentrate. I learned to exercise, so my body could give my mind a little more breathing room. I accepted that I would never be able to read everything I wanted to, and gave myself permission to mix the difficult reading that stretched my brain with the lighter writing that delighted it.

I was, in other words, an actor making purposeful choices under constraints.

I still don’t read the way I did as a kid. But what adult does? Our lives are full of distractions, many far more potent than the Internet. A child in the house is more of a concentration-killer than any technology or medium invented by humankind. Still, we deal with it, or we go extinct. We need another generation to read our work and put it on a golden-age pedestal!

My ten-year-old sons are both avid gamers and voracious readers. I worry about all sorts of things in their future, but I don’t worry that they won’t read deeply and well — or live in a world where others do too. They will roam shallows and depths, as they choose.

More perspectives on The Shallows: Jonah Lehrer and Steven Pinker each challenged some of the book’s science. Steven Johnson (in a New York Times column and a blog post) pointed out its neglect of reading’s social dimension. John Naughton assembled an absorbing roundtable about the book in The Observer. In it, Maryanne Wolf, who is sympathetic to Carr’s views, rephrases the issue at the heart of The Shallows into a much more useful formulation: “How well will we preserve the critical capacities of the present expert reading brain as we move to the digital reading brain of the next generation?”