Wordyard / Net Culture / Ecco in the cloud with Amazon

Late last night — because late night is the time to tinker with software! — I decided to test drive Dave Winer’s recent crib sheet on setting up an Amazon Web Services cloud-based server. Dave called it “EC2 for Poets” (EC2 is the name of Amazon’s service), and I’ve always been a fan of “Physics for Poets”-style course offerings, so — though I do not write poetry — he lured me in.

For the uninitiated, Amazon has set up a relatively simple way for anyone to purchase and operate a “virtual server” — a software-based computer system running in their datacenter that you access across the Net. It’s like your own Windows or Linux box except there’s no box, just code running at Amazon. If you’ve ever run one of those arcade video-game emulators on your home computer, you get the idea: it’s a machine-within-a-machine, like that, only it’s running somewhere else across the ether.

Dave provided crystal clear step-by-step instructions for setting up and running one of these virtual servers. (Writing instructions for nonprogrammers is, as they say in software-land, non-trivial. So a little applause here.) The how-to worked hitch-free; the whole thing took about a half-hour, and by far the longest part was waiting for Amazon to launch the server, which took a few minutes.

But what should one do with such a thing? Dave’s sample installation runs a version of his OPML editor, an outlining tool. That gave me an idea.

Regular readers here know of my dependence on and infatuation with an ancient application called Ecco Pro. It’s the outliner I have used to run my life and write my books for years now. It has been an orphaned program since 1997 but it still runs beautifully on any Win-32 platform; it’s bulletproof and it’s fast. My one problem is that it doesn’t share or synchronize well across the Net (you need to do Windows networking to share it between machines, and I just don’t do that, it’s never made sense to me, as a one-man shop with no IT crew).

But what if I were running Ecco on an Amazon-based server? Then I could access the same Ecco document from any desktop anywhere — Macs too. So I downloaded the Ecco installer (using a browser running on the Amazon-server desktop, which you access via the standard Windows Remote Desktop Connection tool), ran it, and — poof! — there it was, a 12-year-old software dinosaur rearing its ancient head into the new Web clouds: 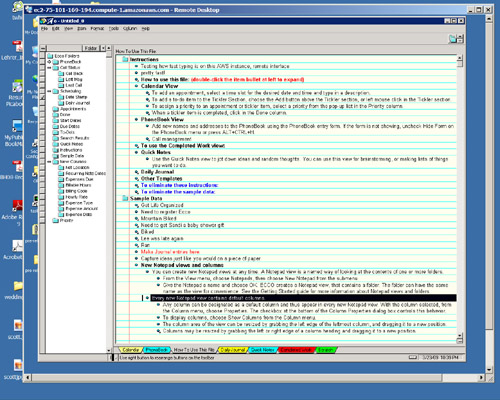 What you see here in the innermost window is Ecco itself (displaying some of the sample data it installs with). Around that is the window framing the remote desktop — everything in there represents Windows running in the cloud. The outermost frame is just my own Windows desktop.

This remains very much in Rube-Goldberg-land at this point. Accessing this remote server still requires a few more steps than you’d want to go through for frequent everyday use. (To me it felt like it was about at the level that setting up your own website was in 1994 when I followed similar cribsheets to accomplish that task.) And the current cost of running the Amazon server — which seems to be about 12.5 cents per hour, or $3 a day, or over $1000 a year — makes it prohibitive to actually keep this thing running all the time for everyday needs.

On the other hand, you have to figure that the cost will keep dropping, and the complexity will get ironed out. And then we can see one of many possible future uses for this sort of technology: this is where we’ll be able to run all sorts of outdated and legacy programs when we need to access data in different old formats. Yesterday’s machines will virtualize themselves into cloud-borne phantoms, helping us keep our digital memories intact.