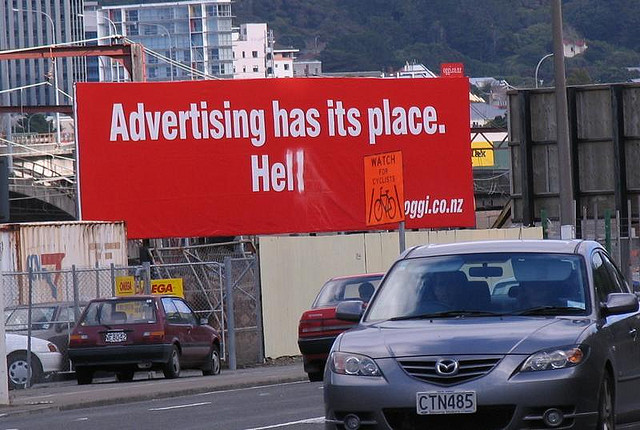 “I have come to believe that advertising is the original sin of the Web,” Ethan Zuckerman declared last week, in a remarkable essay posted at the Atlantic.

The fallen state of our Internet is a direct, if unintentional, consequence of choosing advertising as the default model to support online content and services. Through successive rounds of innovation and investor storytime, we’ve trained Internet users to expect that everything they say and do online will be aggregated into profiles (which they cannot review, challenge, or change) that shape both what ads and what content they see.

Regular readers here know that I largely agree with this view. It’s possible to imagine a different world in which advertising actually serves us as individuals: This is the work Doc Searls has been doing in defining and building VRM (“Vendor Relationship Management,” which turns the corporate world’s “Customer Relationship Management” on its head). it is also possible to point to ads that are respectful and effective (I admire the way The Deck works, for instance).

But mostly, advertising online today is a plague. I don’t believe advertising itself is inherently evil — so Zuckerman’s “original sin” formulation might ring the wrong bells. But it warps the good things about the Web. It stands between us as we encounter one another online. It creates incentives for publishers to make things less usable and less useful, and to blur distinctions that should be crystal clear (as with the new “native advertising”/advertorial fad). So far, it has kept us from fulfilling the potential of the medium we are building.

I argue that nearly every characteristic of the digital medium that critics abhor — its pileup of distractions, its invasions of privacy, its corrosions of trust — turns out not to be an inherent characteristic of the technology at all. These modern media maladies are byproducts of bad business models.

In a retort to Zuckerman, Jeff Jarvis says, “it’s not advertising itself that’s the problem, it’s that we’re doing advertising online wrong.” Maybe so. But this sounds a little like the insistence by political purists (old-school leftists, or present-day libertarians) that their particular system is The Answer, despite repeated failures to implement it in the real world, because “nobody’s done it right yet.”

I’ve been doing this Web thing for 20 years now, and in all that time, no one has solved the basic problems with online advertising that existed from the start. If someone does, I will cheer along with everyone else. But the calls to “give it time” because “we’re just at the beginning” have started to sound hollow. In the meantime, I will explore other options, and I encourage you too, as well.

If you keep noticing that every implementation of an idea sucks, it might be that you just haven’t found the right one. But it could be that the idea itself is simply wrong.