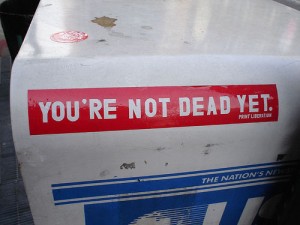 The technology press has been keen on the “blogging is dead” (or “dying”) meme for some time now, but it’s tough to find actual data or evidence supporting the notion. Blogging, of course, is changing; in the digital world, all is flux. But if you’re going to declare, as today’s New York Times headline does, that blogging is “waning,” it would be good to be able to show a decline in numbers. And that, sadly, is missing from the Times story — which cherry-picks statistics that look very different in their original contexts.

The peg for “Blogging Wanes as the Young Drift to Sites Like Twitter” is a study (here’s the summary) from Feb. 2010 — more than a year ago. The study showed that the number of kids ages 12-17 who are blogging dropped in half from 2006 to 2009 (14 percent report blogging, from 28 percent). The same study showed that the percentage of adults 30 and older who blog rose from 7 to 11 during the same period. Meanwhile, a more recent Pew study, the Times reports, finds that “Among 18-to-33-year-olds…blogging dropped two percentage points in 2010 from two years earlier.”

But if you actually look at that report, you find that, overall, blogging is still growing, not waning at all:

Few of the activities covered in this report have decreased in popularity for any age group, with the notable exception of blogging. Only half as many online teens work on their own blog as did in 2006, and Millennial generation adults ages 18-33 have also seen a modest decline—a development that may be related to the quickly-growing popularity of social network sites. At the same time, however, blogging’s popularity increased among most older generations, and as a result the rate of blogging for all online adults rose slightly overall from 11% in late 2008 to 14% in 2010.

Fourteen percent of online adults are making some effort to write regularly in public! That remains a phenomenal fact; if you’d predicted it a decade ago, as only a handful of visionaries did, you’d have been dismissed as a nut (or maybe a “cyber-utopian”).

So the actual story — which, to be fair, the Times’ article mostly hews to (it’s the headline and lead that skew it more sensationally) — is that blogging keeps growing, but it’s losing popularity among teens.

Social networking is changing blogging. (My postscript to the paperback edition of Say Everything addresses those changes at length.) More of us are using Facebook and Twitter for casual sharing and personal updates. That has helped clarify the place of blogging as the medium for personal writing of a more substantial nature. Keeping a blog is more work than posting to Facebook and Twitter. So I wouldn’t be surprised if, long-term, the percentage of the population blogging plateaus or even declines.

So you can keep your “waning” headlines, and I’ll keep my amazement and enthusiasm.

At some point you’ll have more to say than fits in 140 characters, is too important to put in Facebook’s generic chrome, or you’ve matured to the point you want more flexibility and control around your words and ideas.

And Anthony DeRosa points out that Twitter isn’t very popular among the teen set either.