You are viewing an old revision of this post, from August 3, 2010 @ 06:26:45. See below for differences between this version and the current revision.

An anonymous bug filer noticed that the Times seemed to have changed a statistic in the online version of a front-page story about where California’s African Americans stood on pot legalization. As first published, the story said blacks made up “only” or “about 6 percent” of the state population; soon after it was posted, the number changed to “less than 10 percent.” There’s “>a full explanation of what happened over at MediaBugs; apparently, the reporter got additional information after the story went live, and it was conflicting information, so reporter and editor together decided to alter the story to reflect the new information.

There is nothing wrong with this. In fact, it’s good — the story isn’t etched in stone, and if it can be improved, hooray. The only problem is the poor reader, who was reading a story that said one thing at one time, and something different when he returned. The problem isn’t the change; it’s the failure to note it. Showing versions would solve that. 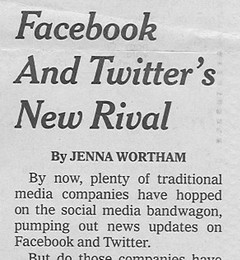