In other words: if you know people are searching for “how do I fix a flat tire?”, you crank out a quick web page, SEO it up, and sit back. As long as you make a little more cash from the search ads on the page than you spent on the writing, you’ve got yourself a business model. It’s an “automated story factory,” as Peter Kafka at AllThingsD puts it. 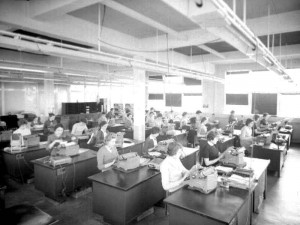 This sweatshop approach to content creation is, of course, anathema to old-fashioned writers and editors. It raises all sorts of disturbing questions about the advertising cart leading the editorial horse (as PaidContent suggests). It holds no appeal to me, personally. It is the polar opposite of what most bloggers do: For the most part they remain — as I argued in Say Everything and as the most recent Technorati survey continues to show — motivated by their own interests and passions, not by the fleeting prospect of fame or revenue.

And yet, as my knee jerks instinctively against the “crank out just-good-enough content” approach, I also start to wonder, why isn’t some enterprising old-media company doing something like this to support its newsroom? If this is the way advertising revenue works on the Web today, why not exploit it for yourself? Why let the AOLs and Demand Medias own the pie? If there are advertising vs. editorial issues to be navigated, why wouldn’t traditional editors and publishers want a say in how they’re resolved?

This is the sort of thing I was imagining when I wrote, earlier this year, that media companies should start from the revenue side in order to figure out new models for supporting the socially important but economically imperiled work of journalism.

Certainly, the New York Times or Time magazine aren’t going to want to sully their brands with such stuff — but why not create a new down-market brand owned by the same company?

Most freelance writers have, for their own survival, always resorted to a parallel strategy: they do high-paying but not always fulfilling work part of the time so they can do work that they enjoy but that doesn’t necessarily pay the bills the rest of the time.

While SEO-driven piecework doesn’t pay well per page, collectively it appears to generate real profit. That money can go to fill an entrepreneur’s wallet, but it could also fund journalism. Maybe that’s what Tim Armstrong plans at AOL: let the generic junk pay the salaries of old-fashioned journalists he’s hiring. Why wouldn’t the owner of an old-line newsroom do the same thing? Why haven’t they done so already?

UPDATE: Danny Sullivan connects the dots: AOL et al. are finding ways to make money from those search visitors that newspaper companies have lately been dismissing as worthless.