You are viewing an old revision of this post, from December 17, 2008 @ 12:27:19. See below for differences between this version and the current revision.

Item one: urgen Appelo was kind enough to include Dreaming in Code earlier this year in his Top 100 Best Software Engineering Books Ever. (Top 100 and best ever! Yow!) When he came back to me and asked me to do one of his “Five Easy Questions For…” interviews, how could I refuse?

Here is the result, in which I talk about, among other things, my early days as a freelancer, what inspires me to keep writing, and what is more interesting than software development.

Item two: Earlier this year, while I was deeply immersed in work on the new book, Derek Powazek asked if I’d contribute to Fray, his labor-of-love magazine — yes, a paper magazine, it’s a thing of beauty. The sensible thing to do would have been to beg off, and I was going to. But the topic of the issue was going to be “Geek: True Stories of People Taking Things Too Seriously,” and as I plowed through my book work I found my mind drifting back to my youth, and a time when I was a true geek, not for software or Tolkien or theater or politics or any of the other things I have geeked out on over the years, but for tropical fish — which was, for me, the ur-geekly pursuit.

So I wrote a little piece, titled Memories of a Fickle God, about those times. It’s online here, along with a bunch of far more captivating pieces.

But really, if you’re interested in this stuff, the thing to do is to buy the magazine (or subscribe), because it’s full of great stories and beautiful art. This is the future of the print magazine: once the profits have all migrated elsewhere, people will still publish on paper. But they’ll do it for their own damn reasons. 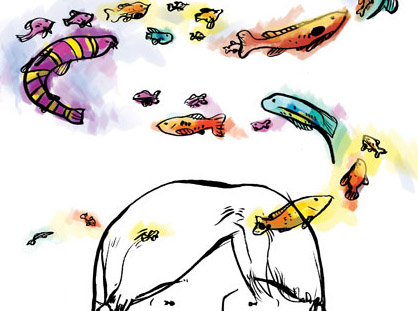