You are viewing an old revision of this post, from October 15, 2010 @ 06:19:37. See below for differences between this version and the current revision. 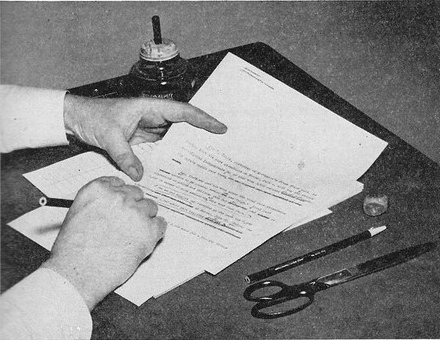 Last week Arthur Brisbane, the new public editor of the New York Times, posted an illuminating exchange between a reader of the paper and one of its top editors.

The reader asked: What’s with the way stories change all the time on the website? “How does the newspaper of record handle this? I read something, and now poof, it’s gone without a trace.”

Jim Roberts, the paper’s associate managing editor, responded: “We are constantly refining what we publish online.” He added that the paper often”uses the final printed version as the final archived version that stays on the Web.” But not always! There are “many exceptions.”

The headline over the column reads “Revising the Newspaper of Record.” But what the exchange reveals is that, right now, there is no record of the newspaper of record. The Times is revising its copy online all the time. No doubt the vast majority of these “refinements” are trivial or uncontroversial. But some of them are likely substantial. (Here was one right on the edge that was filed at MediaBugs.) If I understand Times policy correctly, when a change fixes an outright error, it is supposed to be marked with a correction notice. But there’s no record of these changes, so the Times could be cutting corners here and we’d never know.

When I raise this issue I sometimes hear back some variation on “What’s the big deal? Wire services change their copy all the time. Newspapers have always revised stories from edition to edition. How’s the Web different?”

I’ll tell you how: When newspapers change a story from the early to the late edition, the early edition is still out there for people to read and compare. When you change a Web page, the older version disappears, unless you take active steps to save it.

That, of course, is precisely what the Times — along with every other news outlet that’s committed to accountability — ought to do. Whenever a published story is changed, the paper should make the previous versions available to its readers. (I’ve outlined this idea here, written about it more here, and there’s now a WordPress plugin to demonstrate it in action.)

Let the world see the changes. This is all published, public material; there’s nothing to hide. With this one change to its publishing practices online, the Times can make good on the promise of the old “paper of record” moniker and become a website of record — while giving itself real freedom to keep improving the stories it has already posted.

Here are some potential objections, and my responses:

(1) What about actual errors that you’ve corrected? Unless they’re libelous and there’s some legal need to take them down, you can leave the errors visible behind a “revised version link” — while clearly marking them as errors that have been corrected. This is the most foolproof way of keeping your correction process transparent and trustworthy. When material is removed for legal reasons, a note can indicate that.

(2) Why provide so much excess material to readers? Aren’t we all drowning in too much information already? You can hide the previous versions behind links, the way Wikipedia (or our WordPress plugin) does. Most readers will ignore them — except every now and then when they notice that something’s changed and they want to see why. The Web has more than enough “space” for this data; it’s all just files on disk drives or data in databases.

(3) What you ask for makes sense, but it’s a ton of work to make that sort of change on a website as complex as a major newspaper’s! Right. Sure. I don’t expect this to happen tomorrow. But it’s worth beginning to plan now. I’m firmly convinced that this is an essential “best practice” for trustworthy news publishing online. It will happen, eventually. Why not get the ball rolling?