A decade ago, if you were a “digital” person — if you were interested in how computer technology was changing our culture and economy — then you were a Web person. The Web, built on top of the Internet and ultimately eclipsing its source, dispatched its competitors — the closed online services, the packaged-goods multimedia/CD-ROM industry — and became, for a time, the single face of the digital revolution.

This week’s launch of Rupert Murdoch’s iPad “newspaper,” the Daily, is a milestone: It’s the first significant attempt, since the Web conquered the digital world in 1995, to create a major new media product that embraces technology yet spurns the Web — and the public Internet, too. Chris Anderson’s Wired “Web is Dead” package was the warning shot for this phenomenon, but the Daily’s introduction puts it in front of us in palpable touch-screen form. It boldly declares: We’re digital people but we’re not Web people.

Why do I say that the Daily spurns the Web and the Net? I mean, beyond the obvious reason that there is no Web site that offers its contents in a convenient form each day. It’s not just that. The Daily also contains no links. (Some today see this as a plus; I do not.) There are no RSS feeds. No email addresses to contact the writers and editors. No email alerts or mailing list. Comments on the articles, yes, but not reachable through the Web. No, archives, back issue index, or search! (They’re on Twitter, however. They have a blog, too, and it’s not bad.)

In other words, most of the apparatus of two-way communication that every serious digital publishing venture of the past 15 years has taken as a given is missing from the Daily. They’re serious about this iPad-only thing! But they don’t seem to realize that they’re repeating the mistakes of the very recent past. 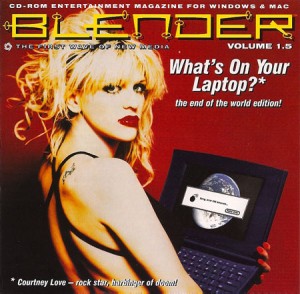 The Daily’s designers are eager to show off sparkling graphics, integrated video, and the swipe-ability that the iPad allows. Unfortunately, they are defining “interactivity” the way the lost pioneers of the 1994-era CD-ROM “multimedia revolution” defined it. They have built a gleaming but limited set of interfaces for users to interact with static, prepackaged content. The Web taught us that true interactivity was the interaction between people moderated by the network — along with the personalization you could build into the network based on those people’s behavior.

The Daily’s one concession to today’s Web is the mechanisms it provides for its readers to share individual stories via the usual routes — Facebook, Twitter, email. The recipient of your share notice receives a link to a URL that’s a Web-page version of the Daily article. We don’t know how long these web addresses will be good for. But for the moment, at least, it’s pretty easy to assemble a set of links that points you to the Web-accessible versions of each article in the day’s Daily edition. That’s what Andy Baio has done.

How long will Baio’s index last? Will it still be easy to assemble after the Daily’s first-two-weeks-free period ends? Will the News Corp. folks ask him to take it down? We’ll have to wait and see.

The question is whether the Daily’s secession from the Web is a matter of convenience or ideology for its creators. Did they put their energy into spiffing things up for the iPad — the hard, fun, innovative part — figuring that they can circle back to beef up their Web offerings later? Or do they feel that it is their calling, their mission, to leave the Web behind?

My prediction: If they’re pragmatists about the Web, they’ve got a chance — they can adapt and evolve their product so it’s a little more up to date, less hermetic and more inclusive of the public that lives online today. But if they’re ideologues — if they really believe that what is essentially a magazine “pasted on a screen” is the future of journalism — then they’re in deep trouble, and the Daily will only be Murdoch’s latest and most spectacular digital money-sink.